Eulalia Pérez moved to Mission San Gabriel (near Los Angeles) with her husband around 1800. After his death, Pérez became the head housekeeper, a leadership position that grew increasingly significant as the number of friars decreased. Her duties included managing supplies and supervising Native American workers. She was the lay overseer of the mission community’s daily life, an extraordinary lay leader long before lay leadership was widely acknowledged.

Encarnación Padilla de Armas arrived in New York City in 1945 as a widow with her young son and $150 in her pocket. She met Jesuit priest Joseph Fitzpatrick and shared her concern about the weak Catholic response to Protestant proselytizing efforts among her fellow Puerto Ricans. Father Fitzpatrick asked her to write a report on the situation and promised that he would deliver it personally to Cardinal Francis Spellman. Padilla de Armas gathered and led a small group of Puerto Rican women to prepare this report, which led to the establishment of the first Spanish Catholic Action Office in the Archdiocese of New York. She worked for many years as a pastoral leader. Then in 1972 Hispanic ministry leaders from across the United States came together for the first ever Encuentro Nacional Hispano de Pastoral. And who was the national coordinator for this historic event? La Señora Encarnación Padilla de Armas.

Pedro is a young immigrant who came to Chicago and remembers, “When I arrived, I looked for a youth group like the one I belonged to in Guatemala, but I couldn’t find one.” After four years of searching, he “found a small community of jóvenes my age.” The faith and community he encountered in that group led him to pursue formation as a leader for pastoral juvenil: “I feel that God is calling me to not allow other jóvenes to go around lost and disoriented without finding a community that supports them and helps them to live their faith.”

Who are the Guardian Angels God has sent to watch over your life, your family, your community?

Featured image by AlicePopkorn and photo of Eulalia from Wikipedia 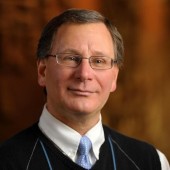