This summer I had the privilege of visiting the Women & Spirit: Catholic Sisters in America exhibit in Mount St. Mary’s College (Los Angeles, California) that has been touring museums across the United States since Spring 2009. As I walked through the display, which chronicles the 300-year history of sisters in America through artifacts, pictures and narration, I could not help but concentrate on the important role sisters have had on the immigration experience; many women, coming from cloistered orders, arrived as immigrants with nothing much but the desire to serve the people of God in a foreign land. Unbeknown to me at the time, this remarkable historical journey filled with stories of passionate faith filled and hard working vowed religious women prepared me to participate in the Second National Encuentro of the Association of Hispanic Religious Congregation of Women in the United States which took place in Sacred Heart Retreat Center in Alhambra, CA from August 17-20. It was surprisingly energizing to join another 110 rostros of women religious, the majority from Spanish-speaking countries (Latin America and Spain), in order to reflect on our identity and discuss our mission in the cultural diverse Church of the United States. Foremost, it was a blessing to realize how, though in a different era with different needs, the Spirit continues to inspire Catholic Sisters to accompany the immigrant in America.

Our focus during this national Encuentro was profound, yet simple: find ways to continue reflecting upon our identity and mission as Hispanic sisters. The first Encuentro took place in De Plaines, IL from August 10-12, 2009 and was convened by Francis Cardenal George, Archbishop of Chicago, after a conversation between Sister Ana Gabriela Castro, MGSpS (provincial for the Missionary Guadalupanas of the Holy Spirit in the US) and Sister Joan McGlinchey, MSC (Vicar of religious for the Archdiocese of Chicago). Concerned with the fact the most Hispanic religious communities in the US do not have mayor superiors in this country and are therefore not represented in either of the two existing conferences of US women religious, they thought it necessary to summon the sisters and offer a space for dialogue to begin. As a result of this first Encuentro, literally “a coming together” with the purpose of simply meeting each other, the 57 sisters, representing 29 Hispanic Congregations, decided that a planning committee be formed for organizational purposes. In turn, this committee developed a theological reflection process to be used at the local and regional levels which led to the base document that served for the “sacred conversations” that took place this summer.

Thus, this second Encuentro, now with 41 congregations represented and convened by Archbishop José Gomez and his predecessor, Roger Cardinal Mahoney, became a prayerful space to speak and listen to each other. As we articulated our reality, we discovered that despite our different charisms, ministries, and symbolic dress (most congregations still wear the habit and veil) we have a common voz and strong religious identity centered in the call to witness our faith through life in community. As our conversation grew, facilitated by Sister Maria Elena Martinez, OSF (Sisters of St. Francis of Penance and Christian Charity), I found it particularly interesting how most sisters, not necessarily coming from “missionary” orders, identify themselves as immigrants. Many shared the pain, struggles and difficulties associated with acculturating, not just to the mainstream or dominant U.S. culture, but also to the ecclesial structure. This common trait with the people they serve, however, seemed to be translated during the conversation into a resounding desire to become bridges among peoples of different cultures.

As part of the process, Fr. Allan Figueroa Deck, SJ (Executive Executive Director for the USCCB office for Cutural Diversity in the Church) was invited to offer brief remarks that could help us further reflect on our own words. Calling himself “blessed among women” for being the only male participant in this II Encuentro, Fr. Allan urged us to look ahead and start questioning how we, as Religiosas Hispanas can respond to the needs of immigrants from other continents as the US Church becomes more culturally diverse. Helping us to recognize and name this gathering as a “historical moment,” Fr. Allan emphasized how this group was taking the lead “not only for women religious of Latin American origin but also for many other women religious of Asian, Pacific Island and African origin now serving in the U.S. who experience some of the same trials and are similarly looking for light and leadership.” (see http://culturaldiversityinthechurch.blogspot.com/). After the meeting, Sister Pat Farrell, OSF (president of the Leadership Conference of Women Religious) who was representing LCWR but was also participating in the table conversations with impeccable Spanish, offered her reflection from her viewpoint as a US religious: “I found myself asking what it means for US women religious to welcome these missionaries from Latin America.” She continues, “Many US religious have little or no experience of their Hispanic sisters here. There is a desire to reach out in welcome, and as that happens I expect that it will provide us with a different perspective on our own US culture and style of religious life. Dominant culture tends to be invisible to itself, while being quite recognizable to minority groups within that culture. Hopefully, in coming to know them we will know ourselves in a different way.”

I think everyone in this gathering left with a sense that they knew themselves in a different way. In fact, having agreed that the association will continue its efforts to convene sisters on a regional level we were able to end with a unanimously accepted declaration: “We are: Consecrated women, maternal face of God, sent to walk with, accompany, and encourage the people of God, mainly Hispanic immigrants and the poor and vulnerable– giving prophetic witness of unity, joy and hope from a community life centered in prayer.” For me, as a US born Hispanic sister that does not quite fit the rostro of the majority gathered, I can still claim this as my own and celebrate this experience. I praise God for the vision of the steering committee and am grateful for all their effort. I now confirm that our gathering highlighted a new era in the historical tradition so wonderfully told in the Women and Spirit exhibition. The rostro of religious life in the U.S. is changing and we, as Hispanic women, are simply trying to respond to God’s call today, in a country that is still primarily a country of immigrants. I conclude with Sr. Pat Farrell words: “There is great richness in store for the US church, great potential for revitalization. And there are enormous complexities to work out. We can only do that in mutual dialogue and genuine openness to one another.” 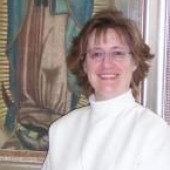